I have fifteen minutes to write an entry. It's going to suck. I had an idea but I procrastinated. I procrastinate a lot. On pretty much everything. This week was one of those weeks where I had the best of intentions, and put everything off.

There was no music that made me do it, that would be awesome if I could use it as an excuse that would actually tie in to this week's entry. But no.

I would never forgive myself if I threw in the towel without even trying. So here is a picture of a glittery T-Rex I recently purchased.

I'd rather be voted off than quit! 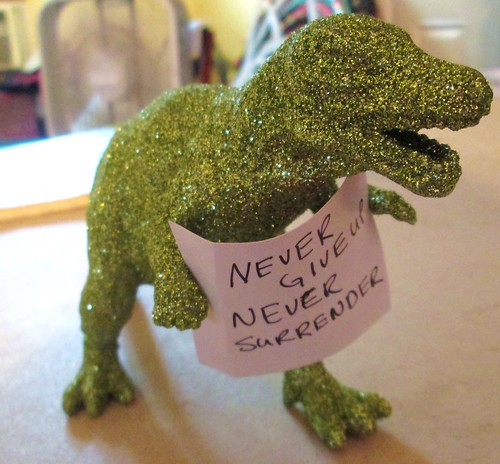 Here, I'll at least write a poem. It's about a racoon named Note:

Note was a racoon.
He lived in a lagoon.
He ate some pie
And then he died
And something something moon.

ETA: I was told by

zephyrly I should add that the dinosaur is actually Winston Churchill.

And that he will defeat the fruit bats because he knows how the Roosevelts work and what all their tricks are.
Collapse