This post was going to be about Fertility Awareness Methods, but now it is about the only thing in this world I truly hate: The football stadium in Arlington, Texas.

Hello! My name is Jessica and I live in Arlington, Texas. I have lived here for nine years. I have been known to go to Kinko's to make copies. I like Kinko's. Sure, they've changed over the years, especially since merging into FedEx Kinko's or whatever, but I still enjoy going there to make copies. It is calming.

Since the stadium opened three years ago, getting to the calming oasis of Kinko's has occasionally become the most stressful experience I've ever endured.

For reference, here is where Kinko's is in relation to the stadium: 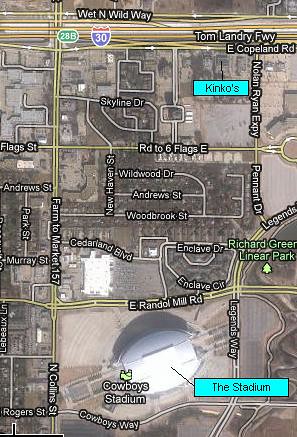 You would think the two are far enough apart that traffic would not be an issue. You would be WOEFULLY INCORRECT.