I AM POSTING TO MY LIVEJOURNAL...

THAT IS WHAT IT IS FOR 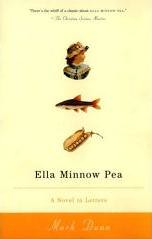 I am going to tell you about a neat book I just read! It is called Ella Minnow Pea, and I heard tell of it at a NaNo write-in!

Here is the premise, try and tell me it is not awesome, you will FAIL because it IS AWESOME.

"The Premise:"
This island called Nollop (so named for Nevin Nollop who wrote the sentence "The quick brown fox jumped over the lazy dog", I looked him up on wikipedia, he does not exist) is all about this one sentence (see previous parenthetical statement). They worship it and its creator as holy (or at least the dudes in power do), and it is spelled out in tiles on this statue of Nollop in the middle of the island, and it's been standing for over 100 years.

Well, the tiles start falling off one by one, so the Island Council goes, "Oh, fuxor, that must mean that Nollop doesn't want us to use that letter! Anyone who writes or speaks the fallen letters will get three warnings and then BANISHMENT."

And the best part is that the book is told via letters written to and from people on the island, so as the letters are banned, they fall out of the book, too.

IT'S PRETTY COOL. The ending is awesome, I totally didn't see it coming, but if you're smarter than me, maybe you can. I'm pretty bad at predicting endings.

PLUS, it is SHORT. I read it in two days, and I read really slowly. It's only 30,000 words or so, SHORTER THAN THE NANOS SOME OF YOU WROTE THIS MONTH.

What I'm saying here is, read this awesome book.

I give it thirty-six stars and a piece of strawberry cake.

...Holy cow, I'm behind on tagging and memorizing entries. I choose not to think about it until I'm in front of a computer for six hours. (Six hours of FREE TIME, not WORK TIME, literalists, GEEZ.)


*Q: Is the book amazing, or the review?
A: Yes.
Collapse