Firstly, I changed my mind and I'm making my start date for my 101 things to today. This makes my official end date Monday, February 15, 2010. There are plenty of things I can work on before I move out, and having the list be posted and replying to comments and all that jazz has gotten me thoroughly pumped to get it going.

So in order to help me tag and memorize all my entries, as per item #28 on "The List" (which I feel needs a more powerful name, don't you?) I'm going to start doing "Today in My Livejournal History", where I will Go Back In Time, if you will, to entries past from this very same day, and tag and memorize them. But also post about them today. It should be interesting, at the very least! I'll throw it onto the end of my posts about regular things (in addition to stupid things), as per item #98, which is to post about regular life. You can read it or not, IT IS TOTALLY UP TO YOU.

I will post awesome things about Scarborough Faire later today, but for now:

So last year, I posted this cool, epic post about Scratch The Beggar, otherwise fondly known as "That Guy at Scarborough Faire Who Beats Himself In The Head With A Pan For Money". I can't find that post right now, since it's not tagged or memorized (SHAME), but I PROMISE IT WAS THERE. (EDIT: I found it. It is here.)

I am still totally, totally in love with Scratch. This year I proposed to him, with a dollar ring, and he said yes! So now I am married/engaged to T-Rex AND Scratch the Begger, it is very exciting.

I got the very sad news that Scratch would not be Scratch next year, and he is "reinventing himself", and I can only hope that his reinvention will still include a nose horn. I guess only time will tell.

But this year I want to expound upon another totally bad-ass Scarby favorite of mine, and that is the Turtle Man! 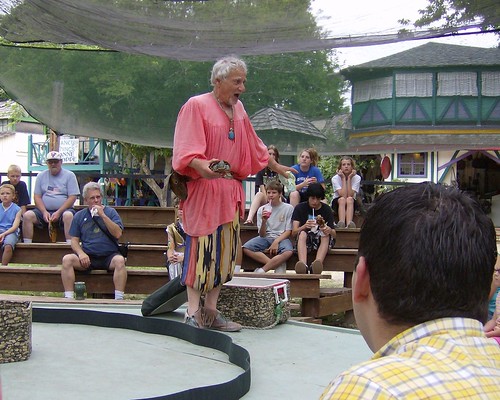 (I took this picture from someone who had previously posted about the Turtle Man. I wish I had scads of amazing pictures to flesh out this entry, but I can't find any. I know there are dudes on the internet with pictures of him. LET ME KNOW IF YOU ARE ONE OF THOSE DUDES.)

For the longest time in my Scarby goings, I didn't bother with the turtle races. "Turtle races?" I said to myself. "That sounds dumb." I was young and naive.

About five or six years ago, however, I ventured into the man's permanent pit of racing wonder, to see what the heck these "turtle races" were all about.

Turns out the show IS dumb, but that's what makes it AMAZING. The turtle man is this old dude who's been doing these turtle races for friggen' ever. The race itself is just a tiny portion of the show, most of it is the Turtle Man doing stuff like this: 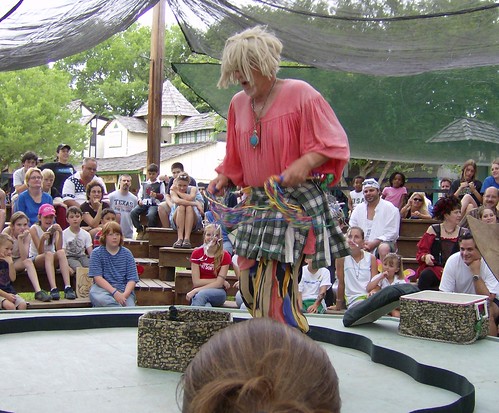 Every time I go, he adds something new or tweaks it ever so slightly. The bottom line is that it is HILARIOUS. Mostly because, come on, the dude is how old and spending his life yelling about turtles? Sometimes in a cape! Or a wig! And you'll never look at those weird popping stress aliens the same again.

HERE ENDS THIS PUBLIC SERVICE ANNOUNCEMENT REGARDING THE TURTLE MAN.

So I went to Scarby yesterday with Megan and Heidi and Adam, and while we were there we ran into Lisa and her roommate and Amber and her menfolk and Jeffrey and Karen and her kids and I dragged ALL OF THEM to see the turtle races.

There was also much fun had with Zilch the Torysteller, who tells classic fairly tales in spoonerisms and has a penchant for elementary school humor. But it's so cleverly done, I never get sick of it. I got to be his visual aid for the boob jokes TWICE yesterday, once purely by chance as I was walking by to watch and see which one he was on, and I was about to walk off when Zilch shouted, "DON'T LEAVE YET!" So I sat back down until he got to the part about why he doesn't tell Shakespeare's "A Tale of Two Cities", did my thing, and left with a wave of thanks from the gracious and adorable Zilch. I think the dude should give me a free cd for the amount of times I've been used in his show.

I drank a crapload of fruit smoothies. I only ate one sausage on a stick the whole time we were there (open to close), and the rest was fruit smoothies. And I didn't use the privies once. It was weird!

Someday, I'm going to go to Scarby with scads and scads of money, and BUY EVERYTHING. There's so much there I see every year and go "Next year, I'll come with enough money to buy that." And invariably I always come with $20.

I did have enough to buy a shirt from the Turtle Man this year, though! I feel fulfilled as a human being.

And Megan and I were dragged at the end of the day to "pub sing", something I'd never heard of in all my years of faithful Scarboroughing. Basically, it's a bunch of people singing and dancing.

I don't think there's anything else interesting to report. THE END.
Collapse